Battle of The Grades. 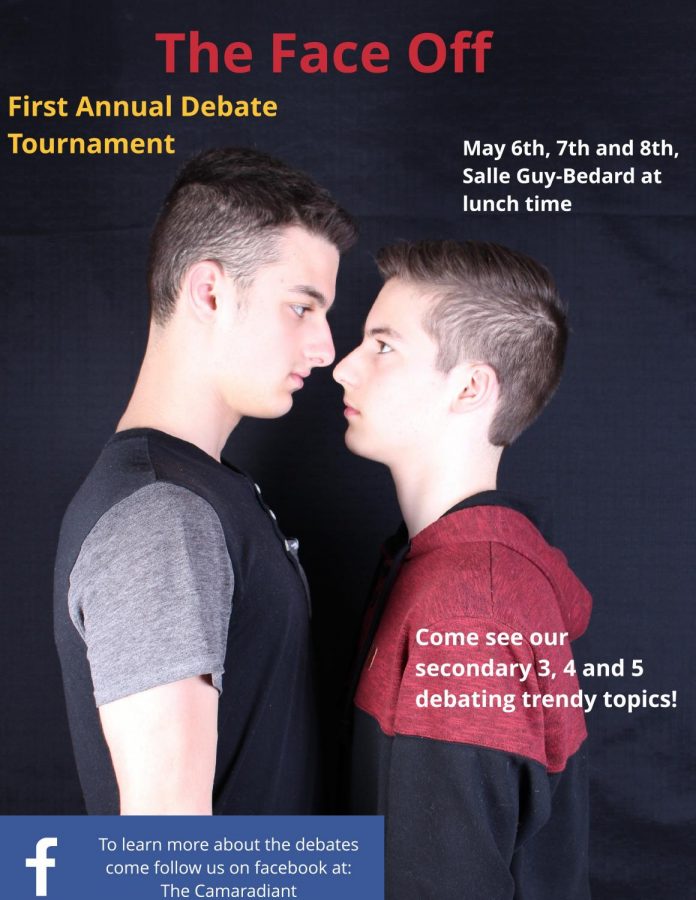 At the beginning of May at salle Guy Bédard, the second cycle students of the English concentration will fight against each other during a series of oral debates.

The debate will take place on May 6th, 7th and 8th at lunchtime in the auditorium. There will be 2 debates per day. It’s free and everyone can come.

The subject will be assigned in a public ceremony on May 26 in the main hall. All teams have to be present. This is when the participants will learn who they will face and on what date.

Since debating is not really like an improvisation tournament, teams will be given time to prepare their performance. Each team will have two periods to document themselves on their questions. Every student in their group will contribute by finding claims and data (arguments) to support their side of the subject. In order to be fair, everyone will have the same time of preparation and teachers will not provide any assistance.

There will be 6 teams, composed of 4 students (three debaters and a replacement).

The Wise Squad and The Busta Minds will be representing Sec 3. In secondary four, the Dab Haters and the Meg Minds will share the stage. As for the eldest, they will be represented by The Association and The Brain Damage. Keep posted for information on each team as they approach the tournament.

In our English concentration program, in the second semester, every second cycle student is evaluated on his or her debating skills. This year, Jean Sébastien Gagnon and Earl White, found that their young debaters were so good that they decided to organize an event and open it to everyone.

A debate is an argument discussion on a subject between people who have different opinions, ideas and thoughts. There are different types of debates televised debate(diffused on Tv), public debate (like the one that the English concentration organized), written debate  (an opinion which is written on paper instead of telling it) and internet debate (a group discussion on a subject on a site). It usually lasts between 20 to 30 minutes, but sometimes when it is professional (competition) and really serious (law court) it can last more than that.

Bright people enjoy sharing their own opinion and argue with people. The concept of debating comes from the Greeks. The Romans took over the Greeks tradition and shared it with people.

Now, debating is a big part of our lifestyle. The law court, the assembly and the Senate are composed of them.

If you have nothing planned for these days, come and make your own opinion on the subject.