The Red Planet; Mission On The Go 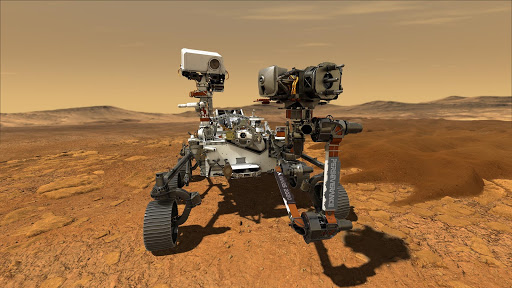 Scientists are really interested in Mars. Many missions were made in the past. A rover called Perseverance just landed last week on the red planet. Its sending us important data for our future.

The main job of Perseverance will be to collect information that will be useful for the future. Seeking signs of ancient life or collecting samples of rocks and regolith (broken rock and soil) will be part of the job.

To be a bit more precise, there are four global goals to achieve. They are divided into four subjects: Life, Climate, Human and Geology. The purpose of this mission is to determine if Mars ever supported life and to prepare it for human exploration. It’s also to understand the process and history of climate on Mars and to understand the origin and evolution of Mars as a geological system.

Perseverance looks like an old rover sent on Mars in 2011 but it has new technologies on it that were never seen before. One of the most important parts of the rover is its supercam. It features lasers and a microphone. The laser will be used to analyse rocks and the microphone will be used to capture sounds on the red globe. The supercam’s laser will also be useful to spot and extract some specific rocks for studying and analyzing to keep them as samples to eventually take them back to Earth.

Just after one week on Mars, Perseverance has taken many pictures, videos and even a sound sequence, in which we hear the wind on Mars. We can observe a few pictures and videos on NASA’s website.

Finally, did you know that a Quebecer is on the team to guide the robot on Mars. Farah Alibay grew up in Quebec. Because of her dad’s work, she moved to England when she was 14 years old. She studied in Aerospace engineering at the University of Cambridge. She is now part of NASA, as a system engineer.

Her job on the mission Mars 2020 was to make sure that Perseverance doesn’t get lost on Mars. Farah is also ‘’one of the main interfaces between Perseverance and the ingenuity technology demonstration’’,she said. Which means that she will be in charge of the helicopter during its techno demo.

Many wonderful things are ahead of us. If this mission is conclusive, it will be a big step in science.