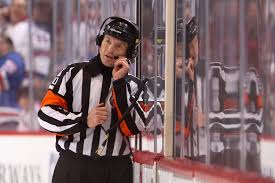 “It wasn’t much, but I wanted to get a f—— penalty against Nashville early in the-” (that’s when the microphone he was wearing cut out).Tim Peel “no longer will be working NHL games now or in the future,” the league announced yesterday. Peel was supposed to retire on April 24th so his ban might be less harsh than it seems.

Even though he is gone, his comment remains a problem for the NHL because it confirms the suspicion that anyone who watches hockey has harboured for a long time: that many referees don’t call penalties that should have been called or they are calling some that don’t even make sense.

Tim Peel is a 54 years old referee. He started his career on October 21 1999, the Colorado Avalanche were facing the Otawa Senators. His first face-off game was on April 17 2002, when the Arizona Coyotes lost the conference quarter final 4-1 against the San Jose Sharks. His 1000th game was on November 14 2015, the Chicago Blackhawks were playing against the Saint-Louis Blues.