Playing Football as a Girl in 2021 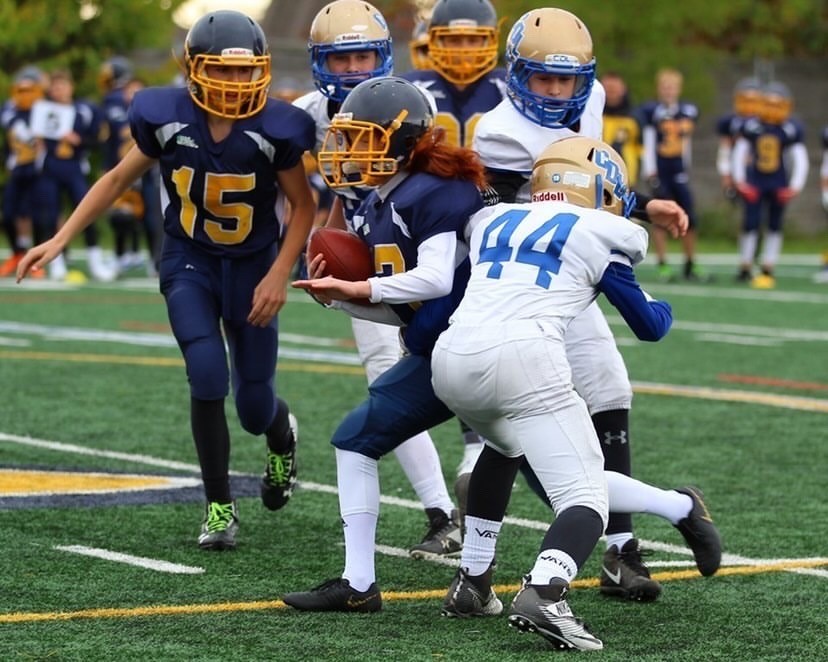 Valérie Perreault, a 15 year old girl who plays football at L’Académie Saint-Louis agreed to tell me about how it is to be a girl among so many guys.
Valérie has been playing football since 4th grade. She was only 9 years old when she began! From grade four to grade six she was quarterback. According to the dictionary, quarterback is a player positioned behind the center who directs a team’s offensive play. The quarterback leads the game. He is the most important player. He is protected by several people. He has to make good and quick decisions. He analyzes the defense and throws the ball to his receivers or gives the ball to the running back.
In secondary one, Valérie did not play. But, in secondary 2, she was running back. According to Wikipedia, a running back is a member of the offensive backfield. The primary roles of a running back are to receive handoffs from the quarterback to rush the ball, to line up as a receiver to catch the ball, and block. There are usually one or two running backs on the field for a given play, depending on the offensive formation. And finally, this year, the football has been canceled.
In her team, we can count 40 people! But when they play, it’s 12vs12. Why do you like football? “I feel a rush of adrenaline through my body as I step onto the pitch. It’s a feeling you only get in a few sports.” What fascinates Valérie in football is that everyone works as a team to achieve a common goal. For her, the number of points doesn’t matter. It is the end result obtained by the work of the team that counts. Valérie’s brother initiated her to football. “When I was young, I used to help my older brother practice his throws with a ball. We could practice for hours in the streets without getting tired.” What about the treatments when you’re hurt?  “ We have physiotherapists who are at our disposal at school.” Valérie needs to train well for the sports she does. Yes, sports. She also plays basketball. “Football practices last about two hours and three times a week. I also practice basketball three times a week and train in the weight room five times a week.”
She also confessed that her family is always there behind her back and supports her a lot. “My family supports me a lot. On the other hand, in secondary 1, my father was skeptical that I would continue to play football. He was afraid that I would get hurt myself but he always encouraged me. He’s only worried for his little girl!”  Valérie’s favorite football team is The Kansas City Chiefs. The Chiefs won the Super Bowl last year (2020).
I asked her if the coaches treated her the same or differently than boys. Here’s what she answered: “The coaches are super fair. The challenge is that they expect as much from me as from anyone else on the team. No special treatment!” And, what about the negative comments? “Negative comments between opponents are frequent but I don’t get more than the others.” she said. Do guys care about you being a girl or not? “I’ll tell you guys aren’t necessarily careful, but they’re not always comfortable ditching a girl. It’s either out of fear of being so close to a girl or out of fear of hurting her.” She knows two girls who play football, proof that it’s not THAT rare.
Whatever if you’re a girl, a boy or non-gendered! Everyone can play football and needs to be treated equally. Take Valérie as an example!