The First Flight on Mars! 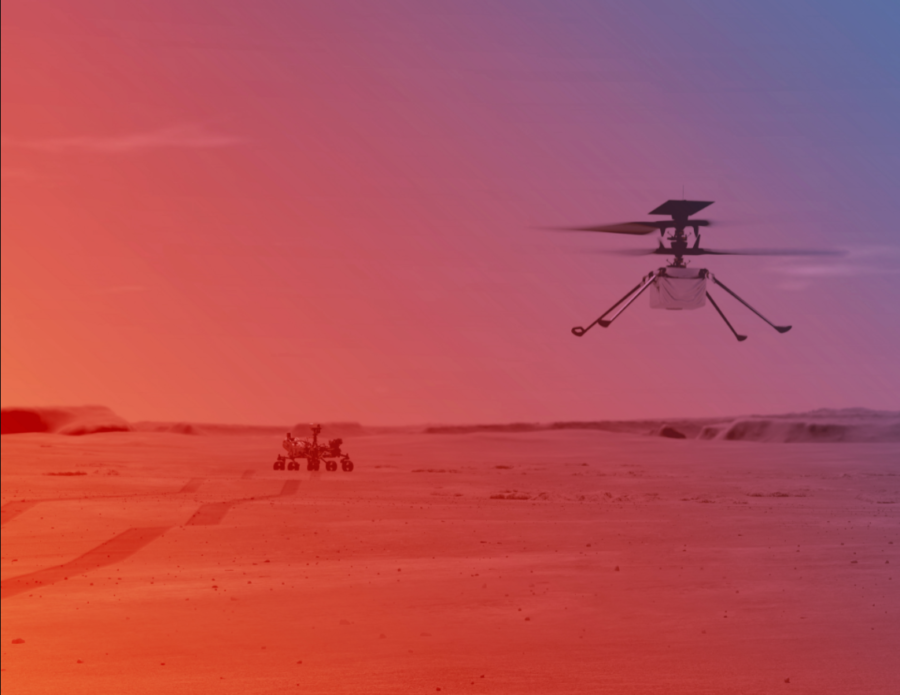 On April 19th, NASA’s Ingenuity performed a successful take-off and became the first aircraft in history to make a powered, controlled flight on another planet.

Ingenuity, a robot chopper which is a part of the agency’s Perseverance mission, took off from the surface of Mars on Monday, climbed to about 10 feet ( 3 meters) above the ground, hovered in the air briefly, successfully performed a turn, and landed. The flight lasted about 39.1 seconds and then touched down on the Martian ground. “We can now say that human beings have flown a rotorcraft on another planet,” said MiMi Aung, the project’s lead engineer at the Jet Propulsion Laboratory (JPL) in Pasadena, California. This flight effectively demonstrated the progress of technology related to space science.


The chopper was built to be light and strong enough since it needed to be stowed under the rover while on the way to Mars. Ingenuity weighs less than 4 pounds (1.8 kilograms). It was also created to survive the harsh environment of Mars, dropping to around minus 90 degrees Celsius at night, after arriving on the surface thanks to their powered solar panels which helped to keep it warm.  The copter was also designed to fly up to 90 seconds to a distance of almost 980 feet ( 300 meters) at a time and about 10 to 15 feet from the ground. Ingenuity flies on its own, without human control, meaning that it must take off, fly and also land with minimal commands from Earth sent in advance. Building Ingenuity costs around 85 million dollars even if it is way smaller than a standard chopper.


Ingenuity’s main job is to demonstrate a technology to test the first powered flight on Mars. The chopper rode to Mars attached to the belly of the Perseverance rover.  It was launched on July 30, 2020, at Cape Canaveral Air Force Station, Florida, and landed on February 18, 2021, at Jezero Crater, Mars. Once the Perseverance rover reached a suitable “airfield” location, it released the copter to the surface so it could perform a series of test flights over a 30-Martian-day experimental window. They have met some issues which kept the helicopter from transitioning into flight mode. As a result, the flight came back after a one-week delay.


Here are the following important steps Ingenuity had to complete successfully to perform as well and also as safely as possible his main job.
– Survive launch, cruise to Mars, and land on the Red Planet.

– Unlock and unfold from its stowed position underneath the Perseverance rover belly pan.
– Deploy safely to the Martian surface.

– Confirm communications with the rover and flight operators on Earth.
– Keep warm autonomously through the intensely cold Martian night.
– Charge autonomously using its solar panel.
– Confirm the energy and power model over multiple Martian days (monitoring daily power consumption, solar energy, and battery levels).
– Unlock rotor blades.
– Spin up rotor blades for the first time on Mars (to a speed below what would be needed for flight) while still on the surface.
– Spin up rotor blades full-speed for the first time on Mars (to the planned flight speed of ~2400 RPM) while still on the surface.
– Take off for the first time in the thin Martian atmosphere.
– Fly autonomously.
– Land successfully.


Hopefully, this successful experience will be a great inspiration for science and it will lead to more improvement towards this subject.