Crickets in your Plate? 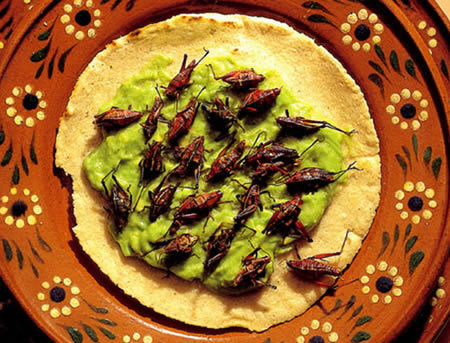 Future. We all question it. Flying cars, holograms, robots living with us, endless towers, a utopian world with no war and everything under the control of a white bearded man who talks to his community on oversized televisions in public places (#WhatsUpHungerGamesReference), but if you want to see that, you’ll need to live until there. Food. We never question what we’re gonna eat. Here’s a list of futuristic food conceived for us, and why are they better for our future.

Lab grown meat
In-vitro meat (cultured meat) is basically cells taken from cow muscle strips, grown in laboratory. More meat with no killing? It’s a yes! Ecologic project seeing the light! In vitro meat is pretty expensive, which is one of the problem. As the project develops, the price could go down and be more affordable. As said before, it doesn’t involved killing which makes it a cruelty free meat. Two months of lab grown meat production equal (approvimately)  50,000 tons of meat from 10 animal muscle cells.

Soylent
It’s a kind of dried milk you mix with water. This liquid covers all nutritional needs that the human body requires. Could we live just by drinking? The creator of the beverage has made a diet of 30 days, drinking only Soylent. Guess what? He survived, but also he is still living on Soylent. He eats 2 ”real meals” by week, just for enjoyment.

Insects based food
In 2025, 9 billions humans will be living on our dear planet Earth. Animals cannot stay one of the only high source of protein. Insects have a high content in fiber and are low in fat. For the same amount of food, insects can bring you as much as 9 times the proteins of meat. Only 2 kg of food are needed to feed  1 kg of insects, while 8 kg are needed to produce 1 kg of cow meat.

Algae
Seaweed, has you may know, grows in the ocean. Agriculture that occupies no land space? Seaweed granules could replace salt in processed food, ready meals, sausages, cheese and bread. It’s a high source of fiber and it’s a good antioxidant. Algae are good indicators of the atrophic status of a water body, that is the degree of pollution and nutrients in that water, they can also clean water. Ex : If green algae dominated a surface like a lake, the water would be purified.

Think about the future and start loving crickets.