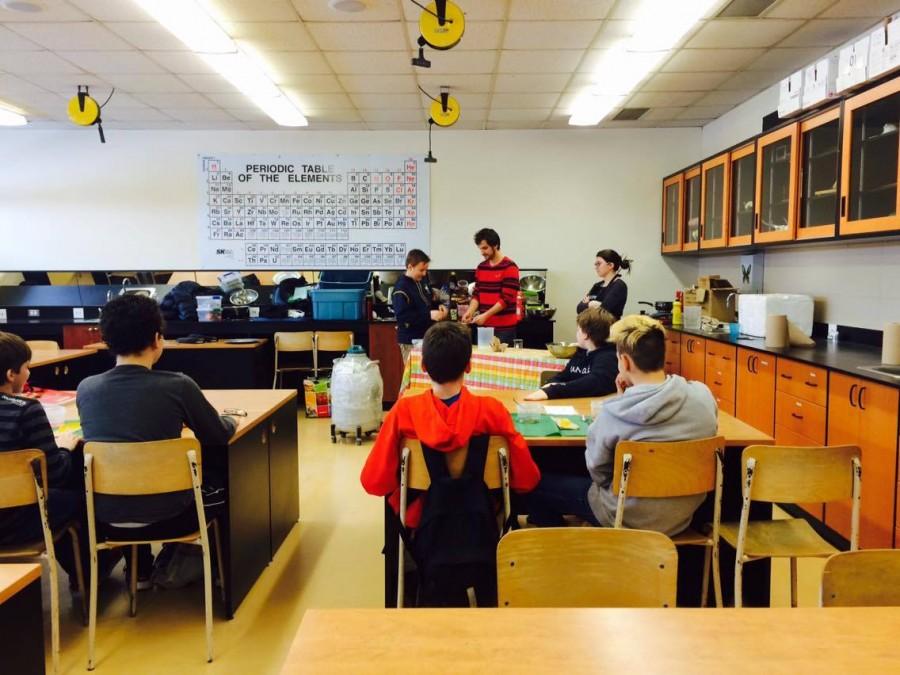 On the February 5, 2016, two University Laval teachers came to school to show what is molecular cooking. They did 5 mini recipes to teach secondary one students how it works.Molecular gastronomy is a subdiscipline of food science . It is a series of chemical and physical transformation of ingredients that occur in cooking.

They started with the fizzy apple juice. The teachers dropped dry ice in a bowl of juice and it started to produce vapor.It is a chemical reaction that happens when dry ice hits a liquid(the temperature of dry ice is -196 Celsius). All the student had a sample of juice.They were suprised to discover that it tasted like normal juice but with a little bit of fizzyness to it.

They succeeded to make cheese under five minutes. They boiled some milk , added vinegar to it then they filtered the concoction. Sounds awful but tastes like cheese. Only some students were brave enough to taste it.

They also made 2 types of caviar to put on crackers. The first one was sweet. It was made with grenadine syrup , water and alginate( It’s brown algae). The teacher mixed the main ingredients together and then the student drop the liquid with a dropper into the alginate solution and it made beads of grenadine. The second one was on the salty side.The liquid was made of balsamic vinegar and a little bit of maple syrup. It was dropped in the same solution as the other one.

The teachers had to make the eggs one night before due to the limited time. They had made a transparent egg, a green egg, and a dehydrated egg. The transparent egg was dipped in a vinegar solution. The vinegar dissolved the shell of the egg. You can still eat the egg. If you had corn syrup to the egg, it will dehydrated it, and if you had a lot of food coloring, the egg will absorb it.

Finally, they made ice cream in two minutes. They accomplished that by adding liquid nitrogen to a cup of chocolate milk and then someone needed to mix these two ingredients really quick. The finished product was really good!

The students had a really good time with the two science teachers!