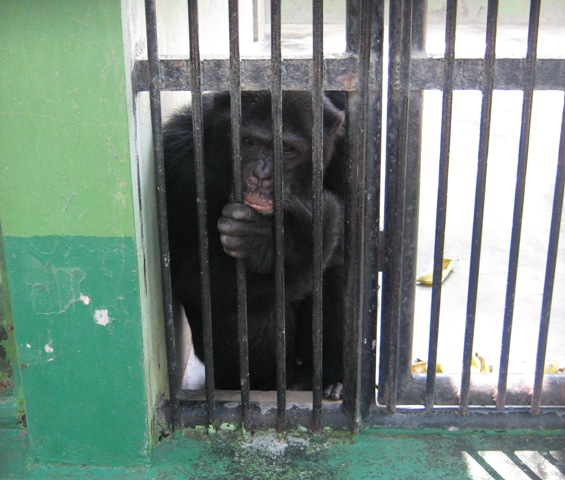 Wild animals needs a lot of space, it is well known. They run, hunt, eat, and live in a territory that has miles and miles to offer. So it’s normal they easily become crazy when they are kept in captivity. For example, big cats frequently walk 10 to 12 miles per day, but laws say that an enclosure for two tigers or two lions needs to have a surface of 80 m2, unfortunately most of the zoos are keeping it to the minimum. It’s obviously not enough for animals and, in my perspective, zoos are prisons for these wild animals.

Many zoologists declare that keeping animals in captivity is as bad as torturing them. They naturally create tight social bonds, and they have strong migratory instincts. They can not develop all this in a zoo, where they are kept with a maximum of 6 other individuals of their specie. We are not talking about a herd. Elephants are, I think, the best example. In the wild, they would live in group that can go to one hundred members. In captivity, they would be kept with 2 or 3 others, and even sometimes alone. Away from zoos, they could live up to 60 to 70 years. In a zoo in China, a mother elephant had 4 kids. Only 1 of them survived beyond 12 months.

Many mentions that zoos are important because they are educational, and it shows us animals that we would not be able to see otherwise. In my opinion, they only teach our kids that it’s alright to keep animals in captivity, where they are cramped, lonely, and very far away from their home.

Also, many animals in good health are killed in zoos, for reasons like surplus or management (not enough space, too many of the same specie, malformations, health related problems, abnormal behaviors). In respond to “how many healthy animals are killed in your zoo?”, Copenhagen Zoo’s scientific director Bengt Holst said,”We do it when it’s necessary. If I should take an average over 10 years – it could be probably something like 20, 30 per year.” And that’s not the worse; in European zoos only, Dr Lesley Dickie mentions that between 3000 to 5000 animals are euthanized every year, for “management”. The animals are even sometimes killed for taxidermy!

An animal born in captivity and hand-raised by human doesn’t have the capacity to interact with the other animals, even from its own specie. That’s why in many cases, father intimidate their cubs and mothers reject them, so they end up euthanized because they’re neglected.

The simplest option, but still not the best, would be to switch sides. Animals would be free and we would be in cars or trucks. We could still watch them, and it would be better because we’d see them in their real habitat, and how they interact in it. I think it could be more informative too because instead of watching, for example, a lion doing tricks that are clearly not in his normal nature, we’d see him with his own kind, acting like a real lion. Still, safari zoos are not the best for them either. A zoo could never provide enough space for so many animals.

Watching animals will always be an awesome activity for kids and even adults, but how looking at animal who suffered, who is sad and probably mistreated can ever be considered educational?