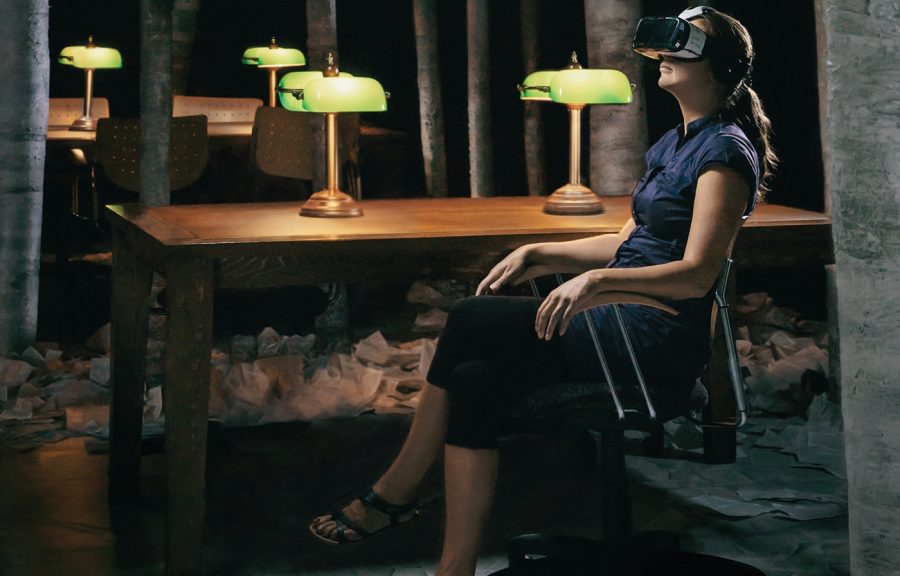 A new VR exposition has recently attracted a lot of people to the “musée de la civilisation”.

Virtual reality (VR) headsets are becoming more and more used for movies, games, etc… It is now time for the museums to experiment with it. –

Created by Ex Machina and Robert Lepage, the Quebec version of  “Une bibliothèque, la nuit” has a small personal touch added by Lepage. About sixty special and unique books coming from the Seminary library have been added to the first room. It introduces ten of the most incredible libraries, which are situated all around the world. They are mainly chosen because of their history, beauty or special attributes… there are the exposed ones:

Before going into the 360 degree world, you first enter a room where the decoration and ambiance are exceptional (my favorite part of the exhibit). The lightning is really well dosed, there is an impressive amount of books and fake raindrops are falling  This is where the setting will be explained by Robert Lepage’s voice (in speakers).

Even though it has won the “Audiovisuel et multimédia Télé-Québec” award on the October 6th, the VR presentation itself is not a masterpiece… “The video quality wasn’t that great” said Johanne Lapierre, after getting out of it. She explained that although the video quality was not that good, she still appreciated the activity “I still recommend it if you have never tried virtual reality” said she, it is quite interesting and you learn many things.

Great work often comes with a price and it is the case with this production. You will have to put out at least 10$ for it (student price and 16$ for the full price), which is pretty expensive for a 30 min VR exposition.  Furthermore, you have to be 14 years old at least to access the exhibition.

Finally, in my opinion, they couldn’t have done better for the introduction and the real life surrounding, but the VR itself could have been of a greater quality. Also, even though it costs a good amount of money, you should try it because virtual reality really makes a great experience.  You have until April 2nd to give it a try!