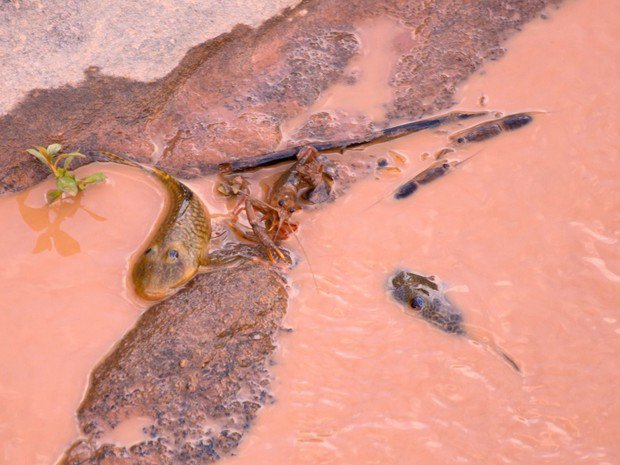 On November fifth, all hell broke loose in Brasil. An iron ore waste dam ceded and  created an enormous  wave of harmful mud. This murky wave killed every animal in the Rio Doce and destroyed numerous villages on its track. The toxic tide reached the ocean during the second week of December.

Thursday November fifth 2015, an iron ore waste dam from Samarco mining company, in the Brasilian state of Minas Gerais, gave way under its own weight. This environmental tragedy has killed countless fish in the Rio Doce, the fifth biggest river in Brasil. It had covered all the 650 km of the river and started to contaminate the Atlantic ocean in mid December. A gigantic part of protected forests were touched by this tragedy.

This event had killed not less than 13 people and destroyed Bento Rodrigues village. Thousands of families are now without food and water.The youngest victim was a five years old boy.

Animals were stuck in the red mud, many were saved but most of them were suffocated by the toxic tide. Furthermore, a lot of those  species were endemic. The mud also slowly and painfully killed all the animals drinking from this river. This substance was so toxic that the fish were going out of water to breath. Some animals are still dying in the Rio Doce.