Who Are The Refugees? 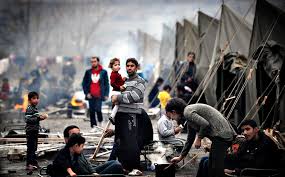 Like other countries, the Canadian government has started to welcome Syrian refugees. Many people from the Middle East were in a critical situation, and needed help. The first flights of refugees coming from Lebanon and Jordan arrived in December, and the Syrians were ready  and happy to get settled in our country. This arrival may seem like an invasion to some, and an act of help to others. But still, we don’t know much about them.

Where do they come from?

You have probably heard about the Syrian refugees, but Syria is not the only country that is touched by a civil war. There is also refugees coming from other countries such as :Jordan, Lebanon, Iraq, Turkey, Iran, and many more.

We know that a lot of people are scared about the refugees coming in our country. There are petitions going around and some of  them count as many as 45 000 names.  They fear that terrorists are coming to cause unrest. Actually, most refugees are families and orphans. Also, the immigration is not a loose activity. There is a lot of security measures involved in the process, and the refugees undertake strict medical and background checks. They also have to go through individual interviews about their travelling history; to make sure they are not related to any kind of armed group. To maximize the security, they confirm their identity with iris scans. It may take many months for refugees to arrive in our country. Maybe the process is shorter than usual (can take up to 36 months) but let’s not forget that these refugees were in a period of crisis.

What is their situation?

In the countries listed above, the population is touched by civil wars. Their life has slowly changed due to constant attacks. Testimonies from refugees-to-be tell that they live in fear and constantly have to move from place to place. There is perpetual bombing and people can barely leave their home because of the danger. Men and women quit their jobs even if they  need money and food. Refugees had a hard time living and were relieved to see a solution, and to live in a war free country.