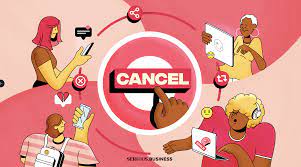 Since 2020, many events took place during the pandemic such as the black lives matter movement, the death of many celebrities and many more. One of these events is the cancel culture.

Many people on twitea bad thing to cancel bad people, but what worse is canceling a person for what they did in the past. As long as people learn from their mistakes and don’t make the same errors, a minority of them are willing (to forgive) them.

What’s wrong is the fact the public does not cancel people who refuse to change their bad doings, like Zoe Lavern and many more celebrities. People like Zoé Laverne easily got away with their wrong doings. In fact she dated a young 14 year old boy,while she is 19, this is pedepholia.

What’s more surprising is the fact that many people who cancelled idols are sometimes minors(around 14 years old).That fact is important, because most of the things they would say to cancel a person are proof that aren’t founded.

Another thing that enrages people is the fact that when the person apologizes for their wrongdoing, the public refuses it. The public should not have a say in these kinds of situations because they are not related to the problem.